Solidarity and its Crisis in the European Union – Interdisciplinary Conference 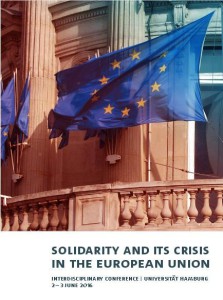 2-3 June 2016 | Universität Hamburg
The European Union (EU) is widely considered to be the world’s most successful and influential regional integration project. However, never before in its history has the EU been confronted with such numerous conflict-laden challenges – such as financial turmoil, migration, nationalist and separatist movements as well as terrorist threats. The gravity of the current state of affairs has reached a point where even leading Europeanists no longer consider it impossible for the EU to fall apart. It is in this time of crisis that the EU reveals a “fault line” that goes deeper than the well-known shortcomings in the EU’s construction and its problem solving capacities: a crisis of solidarity. This crisis has become a crucial test for the integration project itself, since solidarity amongst member states is one of the EU’s core values that lies in the heart of the integration process. In other words, the EU is in a situation in which it is not just facing profound political, economical, legal and societal challenges. Rather, it has to prove that it is more than the sum of its interests. Against the backdrop of the current crises, the conference deals with the concept of solidarity as one of the EU’s fundamental values in its practical meaning: it addresses the role of solidarity in the integration process, it sheds light on the risks of a lack of solidarity, and it discusses different solutions for the most pressing problems in the field.
The conference aims to (a.) address the major challenges confronting the EU with regards to solidarity as one of its core values from an interdisciplinary perspective (covering political science, law, sociology, philosophy and economics), (b.) analyze the consequences of the EU’s solidarity crisis for the integration process itself, and (c.) develop fresh perspectives on the EU’s potential and future prospects for coping with this issue.