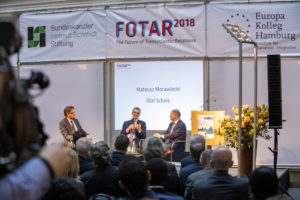 In their discussion on Saturday afternoon, 17 November 2018, at the end of the two-day international transatlantic conference “FOTAR2018” in Hamburg, Polish Prime Minister Mateusz Morawiecki and German Finance Minister Olaf Scholz looked at the big picture. Both agreed that the transatlantic alliance remains indispensable even in times of a multipolar world order.

Polish Prime Minister Mateusz Morawiecki, a graduate of the postgraduate course “European Integration and International Economic Relations” at the Europa-Kolleg Hamburg, had returned to his old place of study for the conference to discuss with the former Mayor of Hamburg and current Vice-Chancellor Olaf Scholz. Questions were addressed about security, energy, trade relations and democracy. Right from the start, Morawiecki said that the Polish population was pro-American and pro-European. Olaf Scholz emphasised that the European Union offers the great opportunity to argue at different points of view, but always remain in dialogue.

Overall, the first joint symposium “The Future of Transatlantic Relations: Challenges in Trade, Security and Environmental Policy” of the Federal Chancellor Helmut Schmidt Foundation and the Europa-Kolleg Hamburg was characterised by lively discussions. With around 200 participants, all three panels on trade, security and the environment were fully booked. A successful start for the initiators, the conference sponsored by the City of Hamburg.

The FOTAR2018 conference, which took place in the atrium of the Hamburg State and University Library, started with a greeting from the President of the Hamburg Parliament, Carola Veit. Among the prominent experts were former US Deputy Secretary of Energy Elizabeth Sherwood-Randall, Director of the Jacques Delors Institute in Brussels Geneviève Pons and Tacan Ildem, Deputy Secretary General of NATO for Public Diplomacy.

Peer Steinbrück, Chairman of the Board of Trustees of the Federal Chancellor Helmut Schmidt Foundation, quoted in his keynote address at the start of the FOTAR2018 conference on 16 November 2018 with regard to the European-American relationship Helmut Schmidt: “We are linked to each other by fundamental values – however much we differ from each other”. Steinbrück also said: “Although the transatlantic alliance is currently showing cracks on the surface, the FOTAR conference shows that the communication channels between the USA and Europe remain open and that the exchange of ideas and cooperation must not take place only at the highest level.

“In view of dwindling self-evidences in transatlantic relations – and beyond – it is a central concern of ours to think constructively about the idea of the West from the perspective of science, politics and civil society,” emphasized Professor Dr. Markus Kotzur, President of the Europa-Kolleg Hamburg.

This Conference was financed through generous funding by the Free and Hanseatic City of Hamburg.