Study Trip to the European Institutions 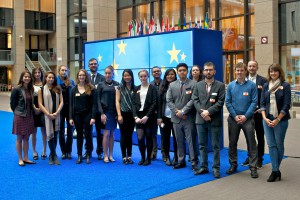 At their first stop in Strasbourg the students gained an insight into the work of the Council of Europe, especially with regard to current challenges and problems in individual member states such as Russia or Turkey. Later in the afternoon at the European Court of Human Rights the students had the chance to pose their questions about the procedure of the court and the implementation of judgements to the German judge Angelika Nußberger.

In Brussels, experts from the European Commission and the Council of the European Union presented and discussed issues such as the current state of negations of the TTIP-agreement, the migration flows in the EU and a possible exit of the United Kingdom with the students. Our participants here once again raised critical points and engaged in a lively debate. Finally, we had the possibility to get insights to the regional representation in Brussels in the Permanent Mission of Hamburg and Schleswig-Holstein, the so-called Hanse Office.