20th anniversary of postgraduate study courses at the Europa-Kolleg-Hamburg 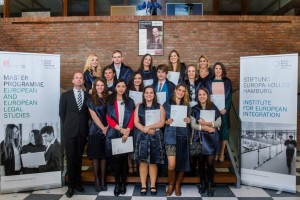 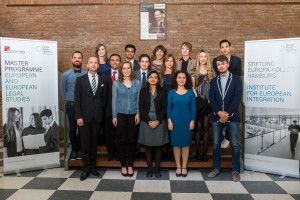 In the context of the Europa Kollegs opening and 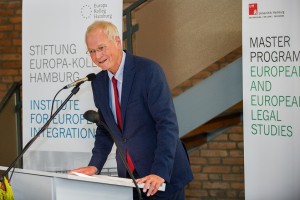 graduation ceremony 2014,Prof. Dr. Bruha, former Director of studies (1993 – 2011) of the Europa Kolleg, was giving a speech regarding the 20th anniversary of the postgraduate study programmes:

as former Director of the postgraduate study courses at the Europa-Kolleg-Hamburg, it is a great pleasure to commemorate their 20th anniversary, which we may celebrate today on the occasion of this ceremony. Having a few minutes only, I’ll couch my speech in terms of a brief fairy tale:

Once upon a time, in the aftermath of the fall of the Berlin Wall and the overcoming of bipolar confrontation, witnessed by some as “the end of history”, at a bright April day in the year 1994 the Europa-Kolleg opened its doors to welcome the first students of a newly established postgraduate study course called “Europäische Integration und Internationale Wirtschaftsbeziehungen” (”European Integration and International Economic Relations“). Established with the primary aim to provide a platform for bringing together young academics from the East and the West to be instructed in the laws and economics of European integration, the programme lasted one semester and was taught mainly in German language.

Henceforward, an amazing journey through Europe started and a dream became true. The process of reunification of the continent was accompanied and mirrored in the lectures, seminars and vivid discussions in the classes and was lived “bottom up” in a prospering college life of young people who were eager to get to know one another and to be together after having been separated for such a long time by the iron wall. Everyone was feeling, that what should belong together now grew together.

The inspiring atmosphere of the infant years and the success of the programme encouraged us to further develop the one semester study course to a full academic year, leading to a proper Master degree. This had also been the wish of many of the former students. In the late 1990ies, a window of opportunities was opened with a call for bids by the “Stifterverband für die Deutsche Wissenschaft” (“Donors Association for the Promotion of Humanities and the Sciences in Germany”) regarding the establishment of a “Modellstudiengang Europawissenschaften“ (“Model Study Programme European Studies”). We applied and were elected as one out of four University places – to which we uphold close contacts to this day. After a pilot phase in 1998/99 and definitely by the start of the academic year 1999/2000, the programme, now called “Master of European Studies”, was run for two semesters. Furthermore, together with law and economic science an additional third discipline in form of political sciences had been established in the programme.

Since the academic year 2008/09, the Master programme operates under its current name “European and European Legal Studies”. One may call it the “third generation” of postgraduate study courses at the Europa-Kolleg, because it builds upon the two earlier ones but exhibits a lot of adaptions and improvements in view of a changed environment. The process of European integration as well as the world have moved on. With the “big” Eastern enlargement of the EU, taking place in 2004 followed by the accessions of 2007 and 2013, the major parts of the “enlargement book” could be closed while new chapters were opened (candidate and potential candidate countries in South-East Europe, accession negotiations with Turkey and Montenegro). This had an impact on the demand. Whereas the number of students from the new acceding Member states of Central Europe was declining, the percentage of those coming from South-East Europe and Turkey was rising (together with students of the associated countries of the European Neighbourhood Policy at the eastern and southern periphery of the EU).

Finally, the increasing role of the EU as a global player, its “world wide web” of association and cooperation agreements with countries from all regions of the world, led to a “third growth ring” of the student body. At least by trend, the postgraduate study courses at the Europa-Kolleg have become truly international. Thus, it was not only wise to switch the course language into English to “open the doors as wide as possible to the world”, but also to include in the curriculum new subject matters and specialization fields, such as world trade, foreign policy and security affairs, which are of worldwide interest.

Has the fairy tale that began twenty years ago ended with the transformation of the programme? Surely not! It’s just continuing…

The amazing journey through Europe is going on, beyond its borders, over its neighbourhood into the world. What once has made up the basic philosophy – the bringing together of young talented students of different countries of the world – and their instruction in European integration and international relations based on the rule of law – is still valid today. It is the belief that with our courses we are helping to form a community of young academics who share the same values of freedom, democracy, and human rights and who by their later work can “make the world a better one” for the benefit of us all, thus making the fairy tale become true.

Let me end my address to you by citing from a song of the great American singer Donna Summer entitled “Once Upon a Time”:

“Once upon a time, there was a girl,
she lived in the land of never-never,
where everything real is unreal,
and only fairy tales come true…

But she believed that what she dreamed of could be real,
so she strived on to make it come true,
fighting odds, not knowing what would come of her,
never giving up the hope within her.

She carried on and on, because she believed,
that once, once in a time in her lifetime,
the things so unreal would be real …